Actually this trip happened about a month ago, but these days I’m posting photos with a delay. Better late than never they say. =)

So it was a rainy and foggy day, but we decided to take a trip to Idrija anyway. In this blog post I decided to only publish photos that I took at Divje jezero and Brusove klavže – two places very close to Idrija, just a bit off the main road. I’ve never been here before, so this was very interesting. And I usually don’t really go outside and take photos when it is raining, but this time I just had to use this opportunity and the whole foggy ambient. The mist above water was giving this feeling of some hidden secrets, so it was perfect for a bit more mysterious photos.

First we stopped at Divje jezero. It’s a small lake, but it is actually connected to the nearby river Idrijca. Because of that I am not sure if that actually counts as a lake, but that is what it is called. It is surrounded by high rocky walls. When we were standing there we could even hear the rocks crumbling and falling deep down into the water. It is kind of crazy now that I think about it, because you can’t be sure where the rocks will fall down, so I guess it is a bit risky. Living on the edge! =D Anyway, this place is pretty amazing, probably even more when you see it with all the mist.

Then we took a rocky road a bit further into the forest and drove to the old river barrier. It is actually called Brusove klavže and the closest comparison would be with a regular river dam. I think it is a typical thing in this area, it has a historic meaning and too bad we can’t see how they actually worked. I assume it must have been a risky job. Working high above water, opening and closing the ramps that regulated how much water can flow through to the other side. The whole point of this monumental structure was to allow tree logs to travel further down the river, where they were used for the big mercury mine. This building is also known as Slovenian pyramids, because of the scale and the whole monumental feeling. And when you stand there, trust me, it is amazing, great and suddenly you feel so small…

Anyway, here are some photos to give you an idea of what I’m talking (writing) about, but if you get a chance I really recommend you to visit this place. 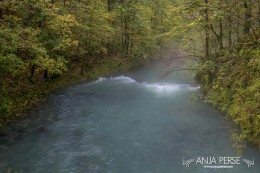 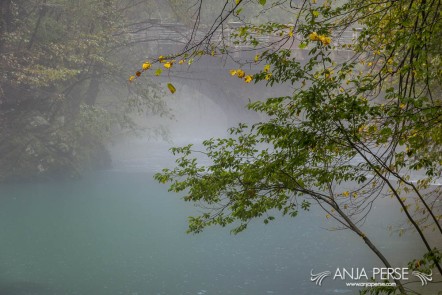 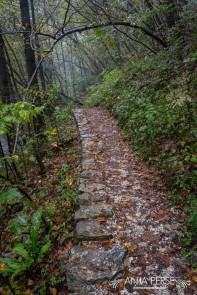 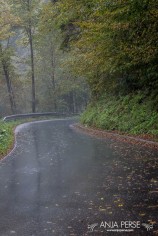 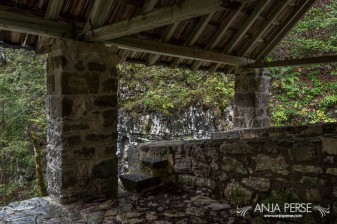 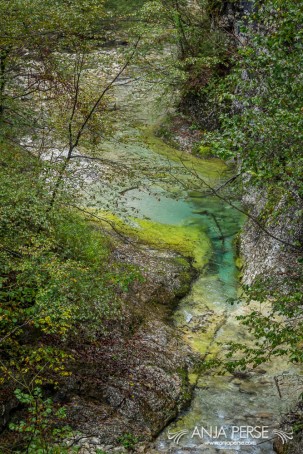 Gorge Predaselj, or in Slovene soteska Predaselj, is a beautiful place that is very easy to get to, but on the other hand most people probably never find it. It is not that it is hard to find it, it just isn’t very well known and there are not many signposts that would help you. The worst thing is probably that I live quite close and I’ve been in Kamniška Bistrica probably at least once per year, but I always passed this place until now. Well, I think I’ve been in this gorge before, but it must have been about 15 years ago or so.
It was about time to visit this place and so we went for a walk along river Kamniška Bistrica, from the bridge above the gorge, to the bridge that is next to a restaurant (or a bar, I’m not sure what they offer) and back again. It was a great trip for hot Saturday afternoon, because the air there is much more fresh.
So if you have a chance go and check the gorge Predaselj yourself, I am sure you would like it. =) 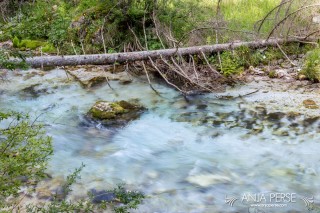 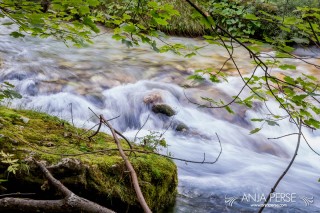 Finally some summer time out for me! I’ll divide this weekend into two posts, because their topics are totally different. This one is about camping in Griblje, small village at Kolpa river. I always liked the river banks at Kolpa, there is always green grass and many trees, it’s much different than the sea side. We put our tent in a shade, just few meters from the water. We got a bit mad when we noticed tent pegs were missing. They were not packed in the same bag and yes, it was a bit stupid of me not to check that at home, but I was sure they must be there, they always are! Obviously not… So we went to Črnomelj to see if we can buy some tent pegs in any store there, but no luck with that, so we had to improvize with different branches. So in the end we solved this problem, though tent probably wouldn’t stand in some weird weather, luckily this weekend was sunny.

Ok, so I just have to say some stuff about this camp and our whole experience. We were laughing all the time, because there were so many funny and unusual things. In general we were happy to be at such beautiful place, we had nice weather, we were swimming, playing badminton, reading, relaxing and had nice time. I even left my dSLR camera in the car, so I took photos only with my compact waterproof Olympus. I guess that camera was the best choice around the water anyway. =)
Well first thing was when I came out of water and I wanted to take a shower, but I realized there isn’t any. Ok, no problem, I can take a day without a shower. Then when I was walking back to the tent I passed a guy taking a shower outside, it was hidden between rocks. So it’s an open outdoor shower, but there is no sign so you have to know where to look or you have to see someone taking a shower to know that.
Then I asked at the reception (that is actually not a reception but a bar) if the toilets at the bar are open all night and we were told that the whole building is closed, usually it closes around 2 a.m. and opens in the morning. Ok… so I guess I have to pee somewhere in nature if I have to go in the middle of the night… Well at around 7:30 in the morning I wanted to go to the toilet and to brush my teeth, but the bar was still closed and I noticed the sign that it opens at 9:30. What the hell?! Where am I supposed to pee now?! And there were already people walking around the camp, so I couldn’t just go behind some tree… Then I came across some lady and I asked her if she knows where could I go and she said there are some portable toilet cabins at the parking lot. Where?! I didn’t see them when I was walking around there a day before, then she said they are hidden behind some wood. And yes, they really were… Why was there no sign?! I was just supposed to know there are hidden toilets or something?! So weird. =)
Then in the morning the camp owner came and he started to hammer some stakes in the ground, just on a path where all camp visitors walked to the beach. It got even weirder when he started to pull some warning strips almost from the river, around those stakes and all the way to the parking lot. He basically closed the whole camp with it, although he did lowered it at some places so we were able to step through. We had no idea why was that, it just felt like he doesn’t want us to go anywhere. So weird and very unwelcoming.
After that the owner started to walk around with a “BEACH” sign and he put it on the beach. Wow, what a surprise for the visitors, they see a beach sign when they are obviously already on the beach… =D Not to mention that the same sign at the road is visible about 2 meters before you have to turn into a narrow alley, so there is a lot of chance you will pass it…

Ok, enough whining, it was a great weekend in general, but these situations were just so random and unusual that I had to write about it. I could write some more but I decided it’s probably enough. =D So this is a great weekend location if you feel like enjoying the nature, just don’t expect too much hospitality or luxury and you’ll be ok. =) 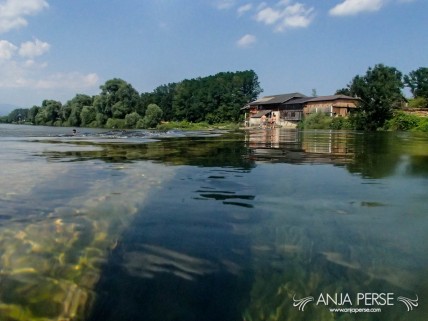 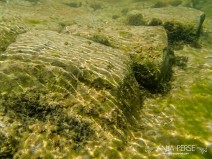 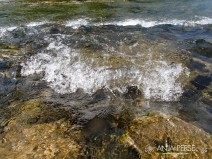 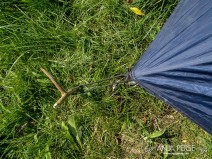 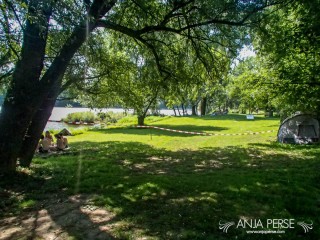 I’ve heard about “Iški vintgar” (Iška gorge) quite a few times, but this year I decided it’s time for me to visit it and see it for myself. It was just a short visit with some walking along the river and enjoying a bit lower temperatures than elsewhere. At first I was quite surprised by the number of parked cars. I assumed there will be a lot of people, but this still surprised me.
At the last parking spot starts a path that goes along the river. There are gravel beaches everywhere and some are accessible only if you walk through the shallow water. It is really nice and beautiful, but right away the crowd bothered me. Ok, it wasn’t that bad, I’m sure there must be days when it’s even worse, but to me it really didn’t feel like enjoying the nature. I wanted to take some photos of flowing water, but more or less everywhere there were people and I didn’t want to take photos with them. When we went further up the stream less and less people were hanging out on those beaches so I was able to take some photos, though not as good and as many as I would want to.
So my final thoughts about this place: it’s nice, it’s refreshing when it’s too hot in the city, it’s close to Ljubljana, you can play and jump around the water, but don’t expect much privacy and peace. Next time when I will want some summer refreshment in nature, I think I’ll go to Kamniška Bistrica. For me it’s about the same distance, only that there is much less people and much more peace. =)